Arrests of undocumented immigrants rise in Florida amid Trump crackdown

After declining for years, arrests of undocumented immigrants have nearly doubled in a region overseen by federal immigration officials in South Florida.

Deportations also swelled by 20 percent. According to the data, the Miami office reported 7,100 removals this year compared with 5,600 last year.

The Miami office’s Acting Field Director Michael Meade pointed to a Jan. 25 order from President Donald Trump as the driving force behind the uptick. 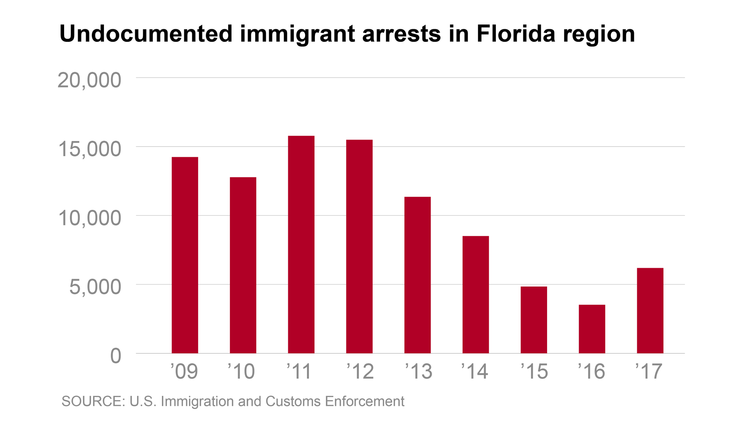 The order rolled back the Obama administration’s directives that said ICE should prioritize apprehending undocumented immigrants with criminal histories and those who came to the U.S. after January 2014.

“It’s given us many more cases in which we can take action on,” Meade told the Sun Sentinel on Thursday. “It basically put every person that’s in the United States, that’s in violation of the immigration law, on the table.”

Meade said his office is still prioritizing those with criminal histories.

The increase also mirrors the bump nationally — ICE records show 143,470 undocumented immigrants were arrested this year, up from 110,104 in 2016.

The Pew Research Center estimated that in 2014, 11.1 million undocumented immigrants lived in the U.S., with 850,000 of them in Florida. And under Trump’s orders, ICE agents have more discretion in arresting them.

Kelsey Burke, a personal injury attorney in West Palm Beach, said that could leave room for people to be discriminated against and get taken advantage of. Burke said she has seen hesitation from clients when filing claims for domestic abuse. They fear if they go into a courthouse for any reason, ICE agents will arrest them.

“There’s a legitimate fear around here,” said Burke, who immigrated to the U.S. from Honduras when she was 10.

Before this year, the arrests from the Miami office dropped every year since 2011, when officials reported nearly 15,700 arrests.

Jessica Shulruff Schneider is director of detention programs at the Miami-based Americans for Immigrant Justice, a nonprofit law firm that helps undocumented immigrants get legal aid to stay in the country.

She said she has seen a change in the type of people who end up in custody.

Instead of people who recently immigrated to the U.S., she said she is seeing more people who have lived in the area for most of their lives. 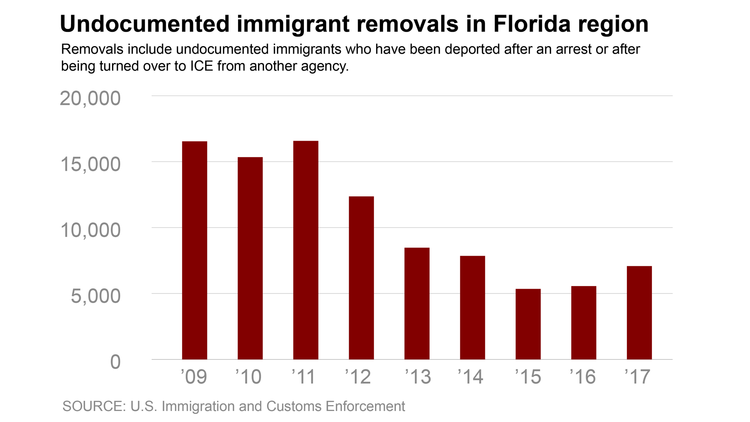 “It was very, very rare that we would ever see somebody [arrested] who was a member of the community,” she said. “We’ve seen a big shift in that.”

Meanwhile, some local governments have thought about ideas to stem the crackdowns, weighing if they should label themselves “welcoming” or “sanctuary” communities.

There is no legal definition of what it means to be a “sanctuary” or “welcoming” community. But places with such designations enact policies to prohibit employees and local police from honoring requests from federal immigration officials to detain suspects longer than legally allowed.

Earlier this year, President Donald Trump threatened to withhold some funding from cities who refused to fall in line with the enforcement. But a federal judge later blocked the order.

Boynton Commissioner Christina Romelus, who immigrated from Haiti, proposed the idea for her city. Local police shouldn’t be burdened with the extra enforcement work and the city should protect its residents, she argued.